Portuguese Water Dogs (PWD) once existed all along Portugal’s coast, where they were taught to herd fish into fishermen’s nets, to retrieve lost tackle or broken nets, and to act as couriers from ship to ship, or ship to shore. Portuguese Water Dogs rode in bobbing trawlers as they worked their way from the warm Atlantic waters of Portugal to the frigid fishing waters off the coast of Iceland where the fleets caught saltwater codfish to bring home.

The closest relative of the PWD also known as black dog is widely thought to be the Standard Poodle; and like poodles, PWDs are highly intelligent, have curly coats, and do not shed. However, unlike poodles, Portuguese Water Dogs have long, undocked, feathery tails. They are also smaller and more robustly built than the Standard Poodle breed. They have webbed toes, for swimming, which one can notice by trying to pass one’s finger between the dog’s toes. Their eyes are brown.

PWDs have a single-layered coat that does not shed, and therefore their presence is tolerated extremely well among many people who suffer from dog allergies. Some call PWDs hypoallergenic dogs, but any person with dog allergies who seeks a dog with these qualities should actually spend time with the animals before purchasing, to test whether the dog is actually non-allergenic to them.

Most PWDs, especially traditional show dogs, are entirely black, black and white, brown, or silver-tipped; it is common to see white chest spots and white paws or legs on black or brown coated dogs. “Parti” or “Irish-marked” coats, with irregular white and black spots, are rare but visually striking. “Parti” dogs are becoming more common in the United States. However, in Portugal the breed standard does not allow more than 30% white markings.

The black portions of Portuguese Water Dogs have a bluish tinge to their skin that is hard to notice underneath their black hair. Predominantly white areas have pink skin underneath and are more sensitive to exposure to the sun than black or brown areas. White hair is finer than black.

Portuguese Water Dogs have a multi-octave voice. Some of them are said to “yodel” when excited, especially when greeting a returning master. Although they are not prone to barking excessively, they have a wide range of barks and sighs, as well as an audible “laugh”: a loud, irregular, breathy pant used at play or during greetings. This is sometimes called “expressive panting”.

This breed makes an excellent watch dog due to its determination to defend its territory with a very loud and distinctive bark. However it will rarely (if ever) attack an intruder after having given the alarm-barks, and so it is not considered a guard dog in the normal sense. In fact many PWDs will, without training, bark three or four times then rush to their master’s side to await further instructions on how to relate to a perceived intruder.

The PWD’s bidability, high intelligennce, and tendency to vocalize and then seek out its human master when specific alarms occur make it an ideal hearing-ear or deaf-assistance dog. PWDs can be readily trained to bark loudly when a telephone rings, and then to find and alert a hard-of-hearing or deaf master. 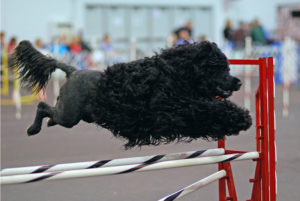 Portuguese Water dogs make excellent companions. They are loving, independent, and intelligent and are easily trained in obedience and agility skills. Once introduced, they are generally friendly to strangers, and actively enjoy being petted, which, due to their soft, fluffy coats, is a favour that human beings willingly grant them.

Because they are working dogs, PWDs are generally content in being at their master’s side, awaiting directions, and, if they are trained, they are willing and able to follow complex commands. They are generally considered too small to be used as service dogs, but make unusually good therapy dogs and hearing-ear dogs.

Owners of this breed will attest that their PWD usually stays in close proximity to them both indoors and outdoors. This is typical of the breed. Though very gregarious animals, these dogs will typically bond with one primary or alpha family member. Some say that this so-called “velcro bonding” trait arose in the breed because the dogs wre selected to work in close proximity to their masters on small fishing boats, unlike other working dogs that range out to perform tasks. In any case, the modern PWD, whether employed on a boat or kept as a pet or working therapy dog, loves attention and prefers to be engaged in activity within sight of a human partner. This is not a breed to be left alone for long periods of time, indoors or out.

As water dogs, the PWD’s retrieving instinct is strong, which also gives some dogs tugging and chewing tendencies.

A PWD will commonly jump as a greeting. Owners may choose to limit this behavior. Some PWDs may walk, hop, or “dance” on their hind legs when greeting or otherwise enthusiastic. Some PWDs will stand upright at kitchen counters and tables, especially if they smell food above them. This habit is known as “counter surfing” and is characteristic of the breed. Although it can be a nuisance, many PWD owners evidently enjoy seeing their dogs walking, hopping, standing up, or “countering” and do not seriously discourage these activities.

While excellent companions to those who understand their needs, Portuguese Water Dogs are not for everyone. Their intelligence and working drive demand consistent attention in the form of regular vigorous exercise and mental challenges. They look (and are) soft, cuddly, cute — but are not to be mistaken as “couch potatoes“. When bored, PWDs will become destructive. A PWD can get into the garbage, silently snag food off the kitchen counters when your back is turned, and can even learn to open cabinet doors.

This breed does not shed its hair. The hair is either wavy or curly in texture. Many dogs have mixed pattern hair; curly all over the body but wavy on the tail and ears. The hair must be trimmed about every two months and, although it is possible to groom at home, it is usually easier to pay a professional groomer.

White is one of the less-common colours among PWDs

Occasionally, a dog may have what is termed an “improper” coat. This genetic condition causes the dog to sometimes have an undercoat. Because these dogs do not adhere to the breed standard, they may not be shown in competition, but otherwise are completely healthy and have all the excellent traits of PWDs. They should not be used in breeding programs, because improper coat is a heritable condition.

The hair of PWDs grows continually and requires regular brushing and cutting or clipping. The coat is usually worn in a “retriever cut” or a “lion cut”.

In the lion cut, the hindquarters, muzzle, and the base of the tail are shaved and the rest of the body is left full length. This cut originated with the fishing dogs of Portugal to keep the body warm while allowing movement of the back legs.

The retriever cut is left 1″ (2.5 cm) long evenly over the body (although some owners prefer the muzzle or the base of the tail shorter). This cut is a more recent style and originated because breeders wanted to make the breed more appealing and less unusual looking for buyers.

The PWD in ancient times

At home in the water

Some belief exists that the breed traces as far back as 700 B.C. to the wild Central-Asian steppes, near the Chinese-Russian border, terrains and waters guaranteed to nourish ruggedness. The early people who lived here raised cattle, sheep, camels, or horses, depending upon where they lived. They also raised dogs to herd them. Isolated from the rest of the world, these dogs developed into a definite type, very much like the heavier long-coated Portuguese Water Dog.

One theory of these long-perished times is that some of the rugged Asian herding dogs were captured by the Berbers, a people who spread slowly across the face of North Africa to Morocco. Their descendants, the Moors, arrived in Portugal in the 8th century, bringing the water dogs with them.

Another theory purports that some of the dogs left the Asian steppes with the Goths, a confederation of German tribes. Some, (the Ostrogoths), went west and their dogs became the German poodle, called in German the poodle-hund or puddle-dog, that is, water-dog. Others, (the Visigoths), went south to fight the Romans, and their dogs became the Lion Dog, groomed in the traditional lion cut. In A.D. 400, the Visigoths invaded Spain and Portugal (then known only as Iberia) and the dogs found their homeland.

A Portuguese Water Dog is first described in 1297 in a monk’s account of a drowning sailor who was pulled from the sea by a dog with a “black coat, the hair long and rough, cut to the first rib and with a tail tuft”. The Portuguese Water Dog became known as the “lion dog” due to the appearance of this clip. Some believe that the Portuguese Water Dog made its contribution to history in the 16th century, working on board the ships of the Spanish Armada.

The PWD was a breed on the verge of extinction when, during the 1930s, Dr. Vasco Bensuade, a wealthy Portuguese Sephardic Jewish shipping magnate, began to seek out fishermen’s dogs and utilize them in a breeding program to re-establish the breed. Bensaude’s keel was named Algarbiorum, and his most famous dog was Leao (1931-1942), a very “type-y” fisherman’s stud dog who was bred to so many different bitches that about half of the pedigreed Portuguese Water Dogs in existence can trace their lineage back to him. Bensaude was aided by two Portuguese veterinarians, Dr. Francisco Pinto Soares and Dr. Manuel Fernander Marques. His work was carried on by Conchita Cintron De Castelo Branco, to whom he gave his last 17 PWDs and all his archives.

Dr. Antonio Cabral was the founder of De Avalade kennels in Portugal. Ch. Charlie de Avalade (Charlie), a brown-coated dog, and C. B. Baluarte De Avalade (Balu) were two of his many famous PWDs. He registered his first PWD in 1954, after Bensaude had pioneered the re-establishment of the breed in Portugal. Cabral worked with Carla Molinari, Deyanne Miller, Sonja Santos and others to establish PWDs in the US. The “Mark of Cabral” is a triangular shape of different color/textured hair, usually a few inches from the base of the tail. You can see it more easily on a fresh lion clip — it can look like the clipper got too close.

Deyanne Miller is the single person most responsible for the rise of the PWD in America. In 1972, the Millers, along with 14 other people, formed the Portuguese Water Dog Club of America, Inc. (PWDCA). She worked with dogs from both the Cintron and Cabral lineages to establish a stable genetic pool of PWDs in the United States at her Farmion kennels. Another early US breeder of PWDs was the actor Raymond Burr.