Chelsea is on a real roll, taking out Runner Up Best in Show at Camden Ag Show 8/3/08 and Junior in Show Blacktown K.C 9.3.08. Chelsea was BCC/BOB/Junior in Group/Junior in Show and Best Australian Working Dog at the Bathurst Royal the week before and Best Junior in Group at the Canberra Royal the week before that…..Way to go Chelsea! at just 14 months. Chelsea in her last five entries has won nothing less than JIS.

Chelsea turned 1 and officially attained her Australian Championship title with in excess of 400 points and currently has 700 points toward a Grand Champion title.

breaking a record for the Youngest Kelpie to win BIS at an All Breeds Show! 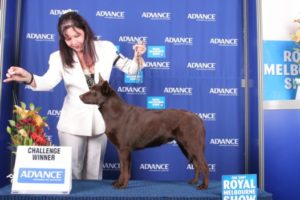 With an International Judge, Chelsea was the only Puppy of all the Working Dogs to get Challenge from the puppy class!

Chelsea wins Champion of Tomorrow from the Puppy Class at 10 months at the Sutherland Shire A.B.K.C 31st contest of Champions 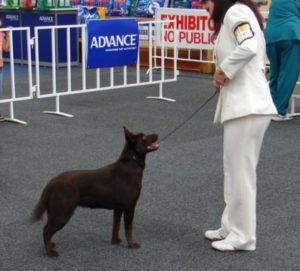 Chelsea wins Res BCC/Minor in Show at the S.A.Working Dog Show to the Best in Show winner!

Chelsea at 7 months – Chelsea unofficially titled at 7 months & had her first BIS at 9 months!

Chelsea is really making her presence felt in the show ring! Chelsea, at 9 months is a Best in Show winner, Multi Best in Group, R/U in Group and Class in Show winner and now a BISS winner at 14 months.

Chelsea in 2007 was No.1 Working dog Puppy in Australia and No.3 National Puppy on the Dogzonline Puppy Pointscore and No.3 overall in the Kelpies, even with starting late and being so young. Chelsea is off to a great start for 2008 DOL pointscore.

Chelsea unofficially titled at 7 months and has now officially Australian titled at 1 yrs old with an excess of  400 points toward her Australian Grand title.

Chelsea won Champion of Tomorrow over 20 very lovely dogs and we were very proud of her.

Marie Colyer of Wingdari Kelpies is so proud to have bred such a beautiful girl and we thank her for our girl.

Chelsea is fed and conditioned on Purina